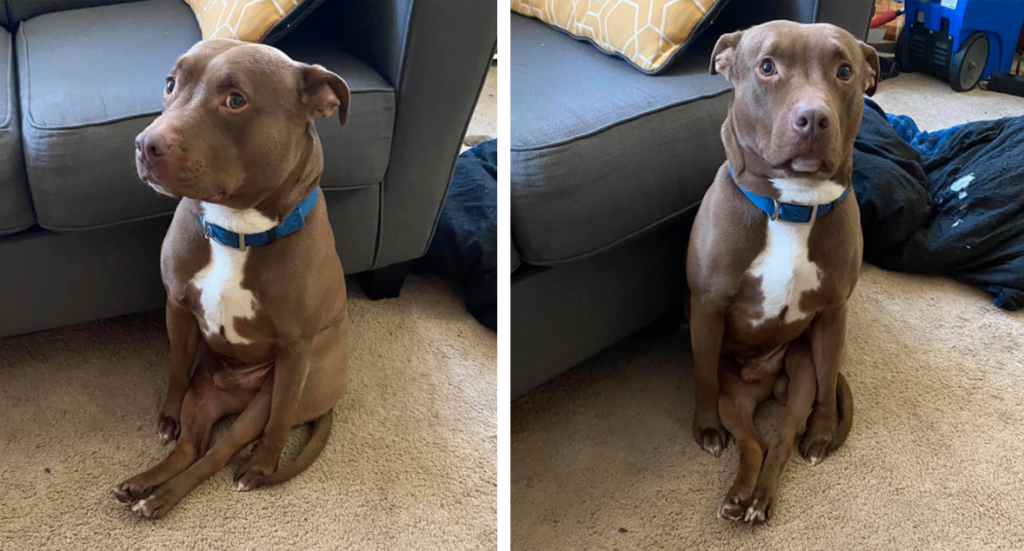 Our dogs all have their own little quirks. No two dogs are ever the same. When I was growing up my dog used to like to sit on top of the sofa like a cat. She grew up with them so perhaps that’s why she was inclined to sit like them from time to time. When it comes to our dogs and their mannerisms, some of it might be learned behavior from watching us. Dogs that adopt bizarre, almost human-like ways of sitting could have just picked it up from seeing the way we sit. It makes us wonder if they think they’re humans themselves.

Below are 15 dogs who have chosen to sit like we do. And it’s a little unnerving:

This little pooch looks quite uncomfortable in his seated position. It makes us wonder why he hasn’t tried switching positions.

While some dogs might sit in strange positions, others have very judgmental eyes. The squinty eyes on this little pup definitely make you feel like you’ve been caught doing something stupid.

When rabbits sit back on their hind legs it’s a cute sight. When a little pup does it the whole thing looks a little strange. But he’s got a cute face so perhaps he can pull it off?

This particular pooch looks like he’s experiencing a very philosophical moment on the couch. What could he possibly be thinking about? Maybe the funny way he sits?

When this Pitbull realized he was being filmed he quickly changed positions. Guess he’s embarrassed by the way he sits.

These three pups all look like they’re choosing to do a yoga routine rather than just sit down.

7 We’re All A Little Weird

This person posted their pooch’s way of sitting as a sign of their weirdness. But that’s what makes him special.

This dog wasn’t judged for the strange way that he chooses to sit. Instead his family member decided to join him on the couch and put her arm around him.

This dog is quite human-like in his sitting mannerisms. Just look at how he sits on the stairs with his little bum on one level, and his paws on the next. If that’s not very similar to human behavior, then I don’t know what is.

This one is actually quite funny. Not only does the dog have one of the most judgmental looks I’ve ever seen but check out the way he uses the arm rest. This dog definitely looks like a parent waiting to scold you for coming home past curfew.

Not only is this silly doggie taking on a strange seated position, but his face has a goofy expression like he knows how ridiculous he looks.

This dog looks like he’s trying to be so prim and proper seated beside his owner. Even his owner doesn’t believe he’s much of a dog either.

13 That Can’t Be Comfortable

This adorable canine looks like he’s seated at a school assembly and there isn’t enough room amongst his classmates.

This is precious pup is named Susan. Susan looks like she’s standing at the cash register and is getting ready to ask for a manager.

This Dalmatian may have a funny way of sitting, but it’s cute. The folding over of the paws mixed with the slight tilt of his head, it looks as though he’s about to ask you to leave.