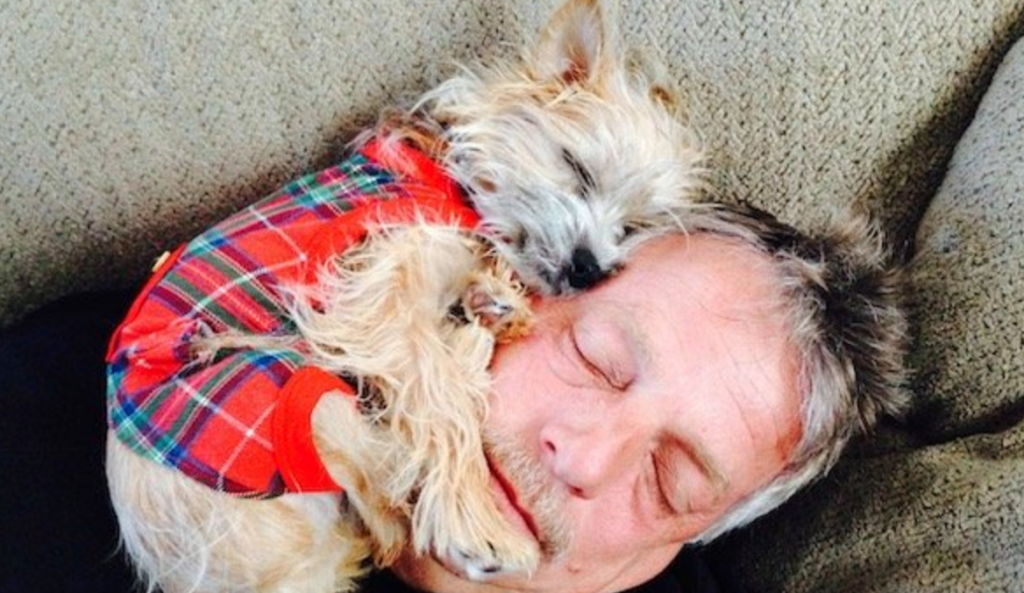 When it comes to dogs our dads will often talk all tough and gruff but in reality, they’re a bunch of softies. It’s probably safe to say that our dads are the ones who end up becoming our dogs’ biggest fans. While they won’t always admit it, and some dads might have initially been opposed to getting a dog, there is no denying just how much dads love the family pooch.

And below are some great examples:

This dad apparently didn’t want a dog to begin with. However, based off this picture we can assume that he has changed his mind. Just look at how closely he’s holding him!

2 Two Dogs Are Better Than One

Apparently this dad claimed to not be much of a dog person. But given that he looks quite content with two dogs on his lap we would say that isn’t the case anymore. He’s not fooling anyone.

3 No Dogs In The House

Sometimes our dads will be quite adamant they don’t want dogs in the house. But we all know that rule never lasts. And it certainly didn’t in this case.

This dad apparently didn’t want an “ankle biter.” We feel it’s safe to say that he didn’t get that. Instead he ended up with his own little precious baby bundle.

This dad had a habit of making jokes about how much he doesn’t like dogs. This photo says otherwise since there are not one but two dogs beside him. Additionally, he also looks extremely happy about it too.

When posting to social media, this person shared the story of how the father claimed to not like the family dog. Just look at him now.

This father was initially against getting a dog. However, it looks like he can’t go anywhere without the dog. He’s got the pooch all snuggled up in his sweater!

When this dad’s family got a puppy he was not excited. But by the looks of the photo taken, that all quickly changed.

This picture shows a man who is fully devoted to spending time with his furry grandchild. But apparently he wasn’t initially thrilled by the idea of being around dogs. Just look at him now.

10 Best Seat In The House

This dad had initially not wanted anything to do with the dog. But it would seem that over time opinions have changed and now he’s got a best friend.

The person who took this picture confessed they had expected an all out fight when they came home with a dog. It looks like the reality went quite differently.

Dads won’t always admit just how much they love their dogs. But one quick look on their camera roll and you’ll definitely see a whole different story. Like this dad who clearly loves taking selfies with his bestie.

13 Caught In The Act

Dad and dog taking an afternoon nap. Can there be anything cuter? Clearly this man loves his dog even if he’s not willing to admit it.

This dad is holding both a dog and an iPad while chilling on the couch. Apparently, he had wanted neither. How adorable is that turn of events?

These two look as though they clearly have their own routine together. There is little doubt in our minds that this dad and pug duo are the best of friends.

This dad had this picture hidden away in his room. We don’t know why he wouldn’t want others knowing just how cool he and the dog really are.

Before getting the dog this dad was very much against the idea of a dog. But it seems that all that has changed. Just look at the love in his eyes as he looks at the pooch in his lap.

18 Thing One and Thing Two

This dad was against the first dog. Then he caved. However, he swore he was putting his foot down for the second dog. But then he caved again. We’re sensing a pattern here.

19 Codependency At Its Finest

This dad said he didn’t want to get a dog. For someone who was against pets it sure looks like they do absolutely everything together. It might be a little codependent but it’s cute.

For a dad who complained a lot about not wanting a dog he sure ate his words. These two look pretty close, just like two peas in a pod.

Facebook
Twitter
Pinterest
PrevPreviousOwning A Dog Can Deepen Our Romantic Relationships, Survey Says
NextCat Gives An Emotional Sendoff To Her Best Friend After He Gets AdoptedNext