“They got to know one another and tolerate each other,” she told us. “I always said Lobo was the brains and Wrigley was the brawn.” Lobo passed away from cancer at the age of twelve, and when Corey and her husband returned from the vet without him, Wrigley searched the house, looking confused. She said this happened for weeks and they wondered whether Wrigley was going to be able to function without his alpha dog.

Dog lover Karen Mandall recalls a similar story from her childhood. After their mini-dachshund Punkin escaped the yard and was hit by a car, Blue, their Great Dane, stood over her in the middle of the street until the family found them.

“Blue had never jumped the fence before and never did it again, but somehow he managed to check on her.” Karen recalls comforting the big dog through days of whimpering after his canine companion passed away.

Susie Dvorak says her long-haired Chihuahua Annie was different after Clyde, the Labradoodle she loved, died. “She used to play with him all the time but since then she doesn’t play with other dogs, no matter who, what, (or) where they are.”

Many people have such painful anecdotes, and scientists and animal behaviorists agree that dogs feel emotion. One US News & World Report story suggests dogs may mourn as deeply as humans do. In it, Barbara King, a professor of anthropology at the College of William and Mary, says her research shows that the above behavior of a “surviving dog looking for his companion” shows that dogs “are thinking and feeling creatures, and that sets the stage for grief.”

Grief is a pack issue. It requires us to be the pack leaders, more than ever — even while grieving our own losses. Books like Jon Katz’s “Going Home: Finding Peace When Pets Die” examine the human aspect of grief and mourning, but little has been written on how the animals themselves react and recover.

In the case of Lobo and Wrigley, Corey shares that, at first, Wrigley “didn’t eat with voraciousness and didn’t seem confident of things he’d normally done without a problem.” They tried introducing him to new dogs, taking him to his favorite places, giving him new toys, offering new food and showering him with all the attention he could handle.

But he needed time, she says. She is happy to share that after a while, Wrigley gained the confidence of a dog higher up in the pecking order and today self-assuredly leads his younger ‘brother’ Quincy around. “Thankfully he came through it and may be a stronger dog for it.”

How has your dog behaved since losing a pack mate? Tell us all about it in the comments below.

With the current pandemic making everyone stay indoors, there is no better time than the

What To Do About Stray Dogs

For dog lovers, our biggest fear is probably what to do if our dog goes 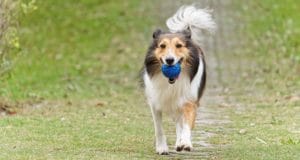 Why Does My Dog Wag Its Tail? 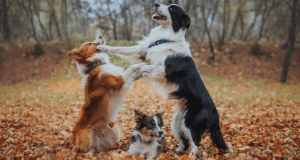 Why Dogs Do The Things They Do