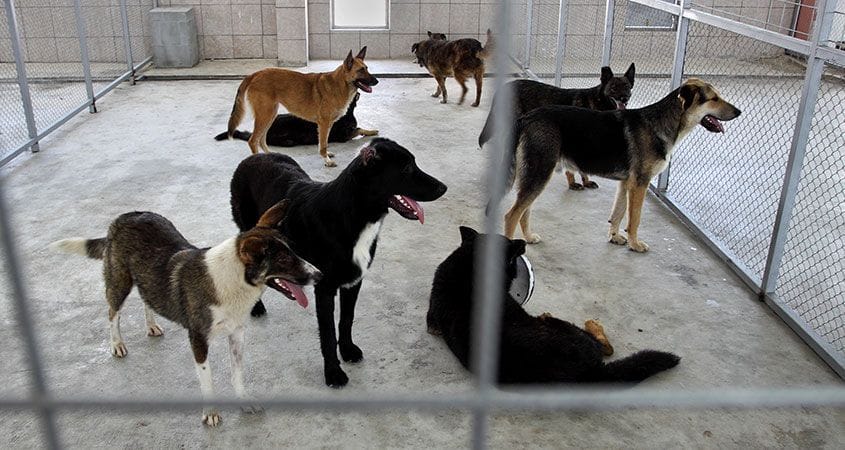 Part of Cesar’s mission is to promote rescue, rehabilitation, and re-homing of dogs. There are millions of homeless dogs in the world, and a large number of them are currently in shelters waiting for one of two options: a forever home, or death. Often, people are reluctant to adopt shelter dogs because of certain preconceived notions about them. Here, we debunk five common myths about shelter dogs.

1. They’re in the Shelter Because Something is Wrong With Them

This myth comes from common misunderstandings about how dogs wind up in shelters in the first place. The perception is that dogs end up in animal shelters because they were strays, they were seized in police raids, or they were aggressive. So, they will tend to run away, they will have emotional problems because of how they were treated, or they are just vicious.

But, in reality, a big reason that dogs wind up in shelters is because they were given up by their owners for reasons that have nothing to do with the dog’s behavior. A lot of families give up their dogs because they can’t afford them anymore, or they are forced to move to a place where they can’t have dogs or, worse, can’t have a dog of a particular breed.

Dogs also end up in shelters when expectations and reality don’t meet — that little Dalmatian puppy grew up into a large, energetic dog living in a studio apartment, or that lap dog that was so cute in the pet store became uncontrollable and dominant because its cuteness earned nothing but affection, affection, affection, so the dog never had any rules, boundaries, or limitations.

The only thing inherently wrong with a shelter dog is that it’s in a shelter and not with a loving family.

While this may be true, it’s not a bad thing, because that shelter dog will never really know its own history, either — especially not once it’s brought into a loving home with good Pack Leaders. Dogs don’t dwell on the past, and we shouldn’t either, especially when it comes to dogs.

There are shelters that offer a glimpse of the dog’s story, but that’s not necessarily a good thing because, again, humans like to dwell in the past. Whether the dog was abused by children, thrown out of a car, rescued from a dog-fighting ring, or whatever traumatic event she went through, it’s past. Dogs live in the moment.

A dog’s past will only be a problem if you constantly dwell on what happened before the shelter. The dog forgot about it once it wasn’t happening anymore, and you can help the dog forget as well by not triggering anything that resembles that early trauma.

3. They May Have a Disease

Yes, they may, kennel cough being particularly common. However, most shelters nowadays will also provide you with a voucher for a subsidized or no-cost first vet visit, and the more devastating diseases have vaccines that are routinely provided by the shelter, like the DHPP (Distemper/Hepatitis/Parvovirus/Parainfluenza) shot, as well as a rabies vaccination. Shelters also make sure that dogs are free of fleas and worms, and they provide spaying and neutering as part of the adoption process.

And…? Unless you’re a breeder or are looking for a professional show dog, mixed breed dogs are a much better choice. They are generally free of genetic or behavioral problems that are typical of some pure breeds, like hip dysplasia in German shepherds or incessant digging by terriers.

Mixed breed dogs are also just much more interesting looking, since they don’t follow the strict standards required for purebreds. Finally, if you live in an area with breed specific laws (BSL) that ban certain dogs, like pit bulls or Rottweilers, having that other identifiable breed in the mix can avoid issues with your dog being outlawed.

Adopting a puppy can be an attractive idea — you get to start out with a four-legged blank slate, and raise it to adulthood. However, people often focus on the “cute” part and forget the reality of raising a puppy: It can be just as intense and difficult as raising a child, and it’s also a full time job.

Sure, it only takes about a year and a half to raise a puppy, as opposed to eighteen (or more) for children, but that can be a year and a half of having things chewed up or peed on, having your rules constantly tested, and having a growing ball of energy rushing around the house.

You can also never be absolutely sure with a puppy what you’ll wind up with as an adult. You may want a medium size dog and the shelter thought that the puppy you’ve adopted was mostly beagle. What happens, then, when the other part turns out to be a St. Bernard or Great Dane and the dog you expected to weigh 30 pounds tops out at 150?

Particularly if you don’t have a lot of time to spend on training, an adult dog around 1 or 2 years old can be ideal. They usually come with all the useful features pre-installed: Housebroken, they know some tricks, they’re used to people. If they do have any behavioral issues, they will be much easier to fix at this point — assuming that they show up at all, which they may not if you do things the right way.

And don’t discount senior dogs, which are those aged 7 years or more. Senior dogs can be ideal for lower-energy households, or in situations where you don’t want to commit for ten or fifteen whole years but still want a loving companion.

So, next time you want to add a dog to your family or your pack, adopt don’t shop — you’ll save a life and find a faithful friend at the same time.

What is your favorite dog rescue organization in your area and why?

I’ve written many times about how animals are instinctual, while humans are intellectual and emotional,

When Hurricane Laura hit the states of Texas and Louisiana, the storm brought with it

Greyhound Spends The Day Stealing Things Off Her Owner’s Desk

We all have this vision of our dogs as being these perfect angels. To be

Things You Can Do To Extend Your Dog’s Life

Acute Diarrhea In Dogs and How to Treat It