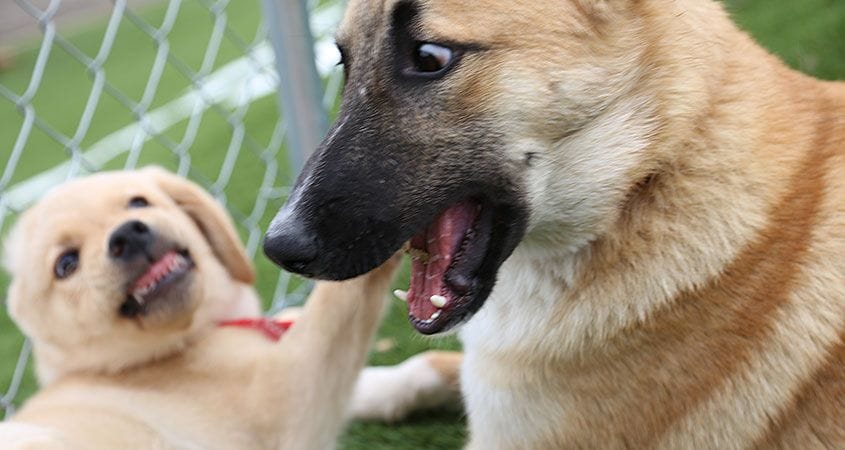 In the U.S., we’re approaching a presidential election year, and as the process of selecting the nominees began, there were 23 candidates just from the two major political parties. That makes it seem like a lot of people want to run for the office of U.S. president, doesn’t it?

But there are about 121 million people in the country who could run for president if they wanted to — natural born American citizens who will be 35 or older on January 20, 2017. In that case, that ridiculous looking number of candidates is actually less than two hundred thousandths of a percent of all the people who could run. Very few people want to be the president, and I could say the same thing about dogs.

Pack leadership
A very small percentage of dogs are born wanting to be the pack leader. That is why it is so important for us to provide them with calm, assertive leadership. Dogs will not follow instability. But humans can and do, and we’ve seen many examples of that throughout history. In fact, it sometimes seems as if humans only want to follow unbalanced and aggressive energy.

When we don’t give our dogs that leadership, they will try to fill the gap, but this just makes them anxious or aggressive. You can’t force a dog to take on that role: In the canine world, pack leaders are born, not made.

Red zone cases
However, when it comes to red zone dogs, they are made, not born — and they are made by humans. We’ve been doing it for thousands of years, at least as far back as Roman war dogs if not earlier. These dogs were formidable because they were bred to be that way, and this is how and why mastiffs were originally created. They came into battle with their humans and were unleashed to be killing machines.

As I said, though, even if dogs are bred to have the physical capabilities for waging war, they do not naturally have the instinctual tendency. That must be created in them and, unfortunately, humans are still doing this to dogs that will never see a battlefield.

Dog fighting
Although staging a dog fight is now a felony in all 50 U.S. states as well as at the federal level — and just attending a dog fight is a federal felony — there is still a lot more of this going on than you would expect. According to the ASPCA, while it’s difficult to estimate the prevalence of an underground, illegal activity, the number of animals brought to shelters with injuries consistent with dog fighting indicates that there are still tens of thousands of people involved.

And, while dog fighting is frequently associated with gangs and other criminal elements, people from all walks of life come to them. Shockingly, some of them even bring their children, perpetuating animal cruelty through generations, even though it’s now also a federal felony to bring anyone under sixteen to a dog fight.

Abuse from puppyhood
But you can’t just put any two dogs into a ring and expect them to automatically fight to the death. Before a dog will do that, it has to be “trained” (i.e., abused), and for dogs unfortunately born into this world, that abuse begins from the time that they’re puppies, during which they are never allowed to be dogs.

Puppies being groomed for fighting are constantly taunted and punished until they learn to show their teeth aggressively in response. Then they are left with chickens to chase until their prey drive kicks in and they learn how to kill. Dogs that fail to develop the proper aggression are often abandoned, dumped in remote areas or left in a ditch by the road. Or, even worse, these are the dogs used as “bait” to teach the more aggressive dogs how to fight and kill.

Sadly, the abandoned dogs that were not aggressive enough for the terrible humans who do this sort of thing are often still too aggressive for the good people who try to rescue them. Combine that with the dog invariably being from one of the power breeds, and even the ones that escape the fighting ring through abandonment wind up being killed in shelters, considered dangerous, incurable red zone dogs.

Dogs don’t follow unstable leaders
I pointed out previously a big difference between humans and dogs in following unstable energy, and this contributes to a trait, or curse, that humans can develop but dogs don’t: the unfortunate ability to hang on forever in submission to their abusers. There’s even a legal term for it: “battered spouse syndrome.”

Animals, especially dogs, don’t do this, and they will always tend toward balance. When they are out of an abusive situation, their minds tell them, “Finally, I can rest.” This is why I can take a red zone case that’s been rescued from the dog fighting world and bring it back to being calm and submissive. That formerly red zone case will continue to be a pit bull or mastiff or Rottweiler, but above all will learn to be a dog again.

Stay calm, and let your dog be a dog!

Share your dog rehabilitation experience with us in the comments

My Dog Eats Everything

Dear Cesar, I have a 1-year-old pitbull named Raven. I have followed your methods since

When I was a kid I had very bad separation anxiety. It happens, we all