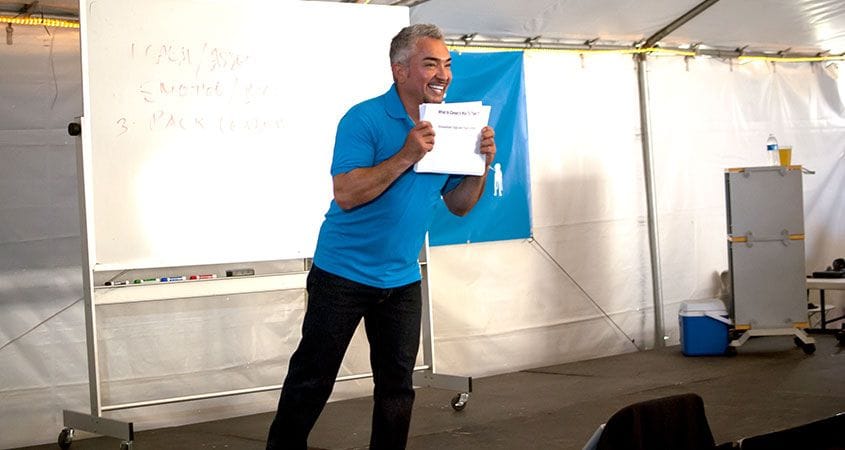 One of the questions I get asked in almost every interview is, “Where did your ability to communicate with dogs come from?”

Well, my mother always tells me that from an early age, even before I could walk or talk, I was always drawn to animals, no matter what species they were. So my love of animals was inborn.

But it was also nurtured by my grandfather and father, who both taught me to always respect Nature and work with her. Working against Nature is a game that humans will always lose.

Now, while I wouldn’t be where I am without what my parents and grandfather taught me, I did have one more important teacher while I was growing up.

Dogs. Specifically, a large pack of working dogs at my grandfather’s farm. They were never household pets. They lived outside with the other animals. But that pack worked as a group and nobody ever trained them.

They were rarely leashed but when they were, my grandfather did it with the same rope that he’d use to lead the horses and cows around. Otherwise, they roamed free, although they never wandered away.

And nobody ever had to give them commands to get them to do their jobs. Time to move the cows from the pasture up to the pens? Those dogs were on it from the second the humans let the cows out, circling behind the herd and nipping at their heels to lead them to where they had to be.

Grandma is taking lunch out to the workers in the fields? Time to keep the pigs from harassing her and trying to steal the food.

It was, honestly, amazing to see. What I learned by watching those dogs is that there are always leaders that all the other dogs follow. There were never dog fights or excited dogs or anxious dogs. Every dog had its place and knew it, and they were happy.

What this pack taught me are probably the most important lessons I’ve ever learned. First, dogs will always follow the calmest, most balanced and assertive leader. Second, the secret to working with dogs is not in telling them what to do. It’s in listening to what they are telling you.

The third lesson is the one that people seem to have the hardest time learning: be aware of what you are saying to the dogs — and I don’t mean with words. You are communicating with your dogs constantly through your energy and body language, and when you send the wrong message, or mixed signals, it makes your dogs very confused.

This is why comforting an anxious dog is the wrong thing to do. Giving affection will not calm down a nervous dog. Instead, it’s telling the dog that you approve of its state of mind in that moment.

This is also why yelling at an excited dog just makes them more excited. The dog isn’t hearing your words when you shout “No!” or “Stop it!” The dog just senses your energy, which is also excited. In a dog’s eyes, when you yell at it, you’re joining in and encouraging the excitement.

One of the best ways you can learn how dogs communicate is to go to the dog park and just watch them. Observe the way they hold their heads, ears, and tails, how they approach each other, and how they negotiate shared physical space.

You’ll also notice that some dogs are naturally dominant and other dogs defer to them, and size or breed makes no difference. If a Chihuahua is more dominant than a Rottweiler, then that big dog is going to let the little dog have his way every time, as long as the Chihuahua’s energy is calm and assertive.

While you’re observing dogs, don’t forget that August 26th is National Dog Day. I encourage you to celebrate dogs on that day and every day. One of the best ways you can celebrate is to learn to listen to your dogs. They’ll be grateful to you for it.

Join the pack! Subscribe to the Cesar Millan’s newsletter, and don’t miss out on contests, promotions, and the latest news from Cesar!

‘My Pack Is Complete!’

Jahira came into my life at just the right time. She was instrumental in helping

Narwhal Puppy Had A ‘Tail’ Growing From His Face

Mac’s Mission is a rescue from Jackson, Missouri who specializes in helping homeless dogs with

Dog Nutrition: A To Z