In Episode 3 of the second season of “Cesar 911,” Cesar visited a veterinary hospital to help an over-excited dog that was used as a universal blood donor to other dogs. Now, unless you’ve ever gone through the experience of your dog having to have a transfusion, you may not even have been aware that dogs, like humans, do have blood types, but that’s where the similarity ends.

You’re probably familiar with the human blood types O, A, B, and AB, which come in both “positive” and “negative” varieties. What these letters refer to are the most important types of antigens on the blood cells.

Antigens are proteins and sugars on the surface of the blood cells that the human immune system reacts to. In human blood types, the cells can have either antigen type A, type B, both A and B, or none, which is what O means. The positive or negative refers to another type of antigen, Rh factor, which is either present or absent.

In humans, receiving the wrong blood type can lead to death because it can cause an immediate and massive reaction of the immune system, which will destroy the donor blood cells. This can also be a risk in some pregnancies, particularly if the father is type AB and the mother is O, because the only possible blood types for the fetus are A or B, which the mother’s immune system may attack in the womb.

If all the A’s, B’s, O’s and pluses and minuses for human blood types confused you, then hang onto your hat, because it gets a lot more complicated in dogs. For starters, there are more than thirteen canine blood groups that have been discovered, versus the three types in humans.

Fortunately, most of these antigens cause only weak reactions, so generally aren’t even tested for in blood typing. The most important antigen in canine blood is called Dog Erythrocyte Antigen (DEA), and it comes in eight types, six of which can be tested for. If a dog has only one of those types, DEA 4, then they are considered a universal donor, like Opal in “Cesar 911.”

There’s also another type, DEA 7, which occurs in 40 to 55% of all dogs, while 10 to 40% of dogs will have a negative immune reaction to it, so veterinarians will avoid using type 7 dogs as donors because the risk factors and effects really aren’t well-known yet. In contrast to this, there’s a recently discovered type called Dal (because it was first observed in a Dalmatian), which occurs in 99% of dogs. However, immune reactions to this type are extremely rare, so there’s no typing system for it and it’s never taken into consideration for canine transfusions.

Where Do They Find Canine Blood Donors?

You’re probably wondering exactly where canine donor blood comes from — it’s not like the Red Cross holds blood drives for dogs. Like the veterinary hospital in the Opal episode of “Cesar 911,” many such centers have their own group of dedicated blood donor animals, generally about a dozen dogs and cats, which are frequently the family pets of staff members.

Healthy, good-natured larger dogs (over 50 pounds) are preferred as donors, and are screened for blood borne parasites and diseases before they become donors. The procedure takes about 7 to 10 minutes and, like humans, the dogs are not sedated for it. (Cats are a different story.)

Depending on the type of practice, blood donors are not limited to cats and dogs. At the UW-Madison School of Veterinary Medicine, they also have a horse and two cows designated as donors if it’s necessary. Luckily, cows needing a transfusion are rare — while dogs and humans receive transfusions measured in pints, a cow can take up to 12 liters, or just over 3 gallons!

If you’re lucky, neither you nor your dog will ever need to receive a blood transfusion. But, if your dog does, now you know a bit more about what’s going on, as well as that the donor blood is taken humanely from dogs that really are lifesavers.

Did your dog ever need a blood donation? Tell us what happened in the comments. 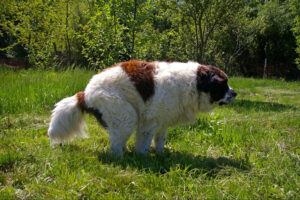 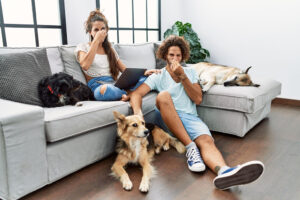 Silent But Deadly: Flatulence in Dogs

Shake, Shiver, And Tremble: Why Dogs Do It