Making up Great Britain are England, Scotland, Wales, and a dense collection of some of the most interesting and unique dog breeds in the world. It would take us more time than we have available to spend to cover them all, so here are just a few of our very favorites.

Widely hailed as one of the most intelligent of dog breeds, and beloved by the English monarchy, the Welsh corgi is a breed of herding dog that originated in Wales. The physical structure of the Corgi (short legs, body low to the ground) enables it to do its job by snapping and nipping at the heels of livestock while simultaneously avoiding any kicks that may come as a result. They are healthy, active, and alert, as well as friendly and outgoing.

Another dog from the pastoral group (encompassing herding, livestock guardians, and drovers), shelties as they are known colloquially are an ideal family dog. Coming from a combination of rough collies and many different toy breeds, shelties are highly intelligent and very active. They love to really let loose in open spaces, so herding activities in the park are perfect for them!

An English classic, the English bulldog’s origins are somewhat shady. Originally used for bullbaiting, a “sport” that involved tying a bull to a wooden post and setting a bulldog loose on it, the bulldog remained popular as a pet even after the Prevention of Cruelty to Animals Act was passed. They are tenacious but friendly. Fun Fact: Winston Churchill during World War II was often depicted in political cartoons as an English bulldog.

Few people know that the Golden retriever was originally bred in Scotland as a gundog. Despite its roots in the UK, many versions of this breed exist, including American and Canadian in addition to the classic British. They are traditionally thought to be one of the kindest, friendliest, most loyal breeds, with above-average intelligence. Their warmth makes them excellent candidates for animal surrogacy, both for other dogs and even many other species of animal, and their sociability and intelligence make them ideally suited as service dogs in many different fields, from guide dogs to search and rescue.

What are some of your favorite dog breeds and why? 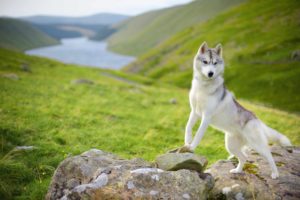 So You’re Thinking Of Getting A Siberian Husky?