Senior dogs are often overlooked at rescues and shelters in favor of the next generation of bouncy, yappy puppies. But if you’re a pack leader to a pup in his golden years, you know that’s a shame, because older dogs still have a lot of love to give — and they can still have lots of personality and spunk even if they don’t have as much energy as they did in their younger years.

Senior dogs also typically require less exercise, suffer from fewer behavioral issues, and come to you already potty trained. For these reasons, they are a particularly good choice for those adopting their first dog.

But just because senior dogs are easier in many ways doesn’t mean that they don’t also have some special care requirements that younger dogs don’t. Here are a few senior dog care tips if you’re a first-timer at adopting or fostering one of these old-timers.

Senior dogs are less likely to suffer from many issues caused by pent-up energy since they have less to expend. But that doesn’t mean they never experience behavioral issues. The first place to start with a behavior issue, though, especially if it has a sudden onset, is at the vet. It may be an early sign of a medical issue, and catching it faster can make a big difference for your pup.

Step Up the Vet Visits to Twice a Year

It’s also in your senior dog’s best interest to visit the vet semi-annually since they are more likely to suffer from medical problems. Remember, dogs age faster than humans, so even six months is a long time. Vet appointments include many of the same routine checks as for younger dogs but may also include additional bloodwork, dental care, and other examinations for symptoms of issues commonly encountered by seniors.

Stay on Top of Parasite Control

As dogs age, their immune systems become weaker, so that means the potential health risks caused by ticks, fleas, worms, and other pests are greater. Talk to your vet about the safest preventative measures.

Is she having trouble chewing that kibble? Many senior dogs struggle with dental issues and may need to switch to different foods. Another common issue associated with canine aging is problems with digestion. Foods designed specifically for senior dogs often include ingredients that are easier to digest and may even include supplements that help alleviate symptoms associated with aging.

Just because he could handle an hour-long walk a year ago doesn’t mean he can today. Regular exercise can help keep your dog mobile longer and also prevent him from becoming overweight, which is a common issue for senior dogs, but you also don’t want to push your pup too far. Watch for signs that he’s had enough. Ensuring your dog’s joint health is also critical as the years go by.

As your dog ages, you may need to make adjustments to the regular routine. For example, climbing the stairs can become very difficult, so keep food and water as well as sleeping areas downstairs if possible.

Also, time outdoors may need to be cut down or only done when monitored since your dog may be more susceptible to changes in temperature and less able to fend off possible threats.

And if your dog suffers from a disability, such as blindness, hearing loss, or an inability to walk, talk to your vet about any special accommodations you should make to ease his experience.

No one wants to think about their dog passing, but those caring for an older dog know that they have even fewer days to enjoy the companionship. Instead of letting it worry you or deter you from adopting a senior dog, use it as a reminder to live in the moment. Snuggle up. Take a walk together. Appreciate every moment your pup has to give.

What specials needs have your senior dogs had and how did you help them? Let us know in the comments!

Due to the current pandemic, many of us have been facing a lot more time

The Power Of Disguise

Humans love to put on disguises, whether it’s playing dress-up as a child, putting on

Dog Honored for Bringing Owner Out of Coma Early

When Andy Szasz became sick with pneumonia, he was taken to the hospital. However, things

In Praise Of Senior Dogs 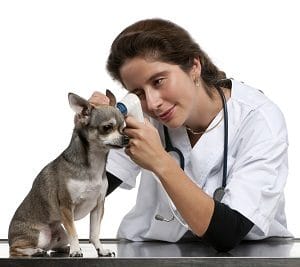 If Your Dog Is Going Blind Or Deaf…