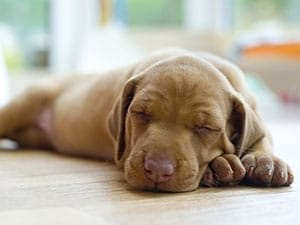 Most Pack Leaders have experienced this before: You’re watching TV to unwind after a long day when suddenly you hear whimpering and scratching. What’s going on? Is your dog okay? You race to check on him only to discover that he’s fast asleep — he must have been having a dream!

But is that really what’s happening when dogs move and make noises in their sleep? After all, it’s not like the dog can confirm this by waking up and telling us what he or she was dreaming about. Though we may never get an absolute confirmation like this, there is plenty of scientific evidence to point to the fact that dogs do, in fact, have dreams.

Our Brains are Similar

While there are obviously a great many differences between human and dog brains, they’re quite alike on a structural level. Because of this, there is a high likelihood that dogs can and probably are dreaming.

We Sleep in Comparable Ways

At least, that’s what EEGs tell us. Like people, dogs enter into a “deep sleep” stage that is accompanied by rapid eye movements and irregular breathing. This is the stage where people are known to have dreams. It’s also the stage where you’re likely to see Fido pawing the air or hear him growling at nothing.

Other Animals Do It… We Think

Just like dogs, rats have been shown to have electrical activity in their brains during sleep that is similar to humans — and their brains are far more different from ours than dog brains. The real surprise would actually be learning definitively that dogs do not dream.

What Do We Know About Dog Dreams?

While we might not have 100 percent confirmation that dogs dream, there are several things that we do know — assuming, of course, that dreaming really is happening.

Small Dogs Do It More

While no one is really sure why, smaller dogs tend to have more dreams than larger ones. Toy poodles and Chihuahuas might experience new dreams every 10 minutes, for example, while a typical golden retriever will only dream once every 90 minutes.

Though it may be surprising and sometimes even frightening to witness your dog acting out in his or her sleep, the behavior is completely normal, natural, and healthy.

Humans have a specific part of the brain, the pons, which keeps us from acting out our dreams. When scientists inactivated this part in dogs, they started doing things like digging imaginary holes, fighting with pretend burglars, and chasing dream birds or cats.

How do you know if your dog is having a dream? Simple. Watch him or her after they fall asleep. If you notice odd movements or sounds around 20 minutes in, you can bet that your dog is probably having some kind of adventure.

Have you noticed your dog dreaming? Share your experience in the comments.

4 Ways To Socialize Your Dog

Meeting people is never easy, but it's even more complicated when trying to find friends

It's happened to all of us. We come home from a long day at work,

As a conscientious dog owner, you work hard to fit their daily walks into your