Dog Plays The Piano For Mom And Takes A Bow 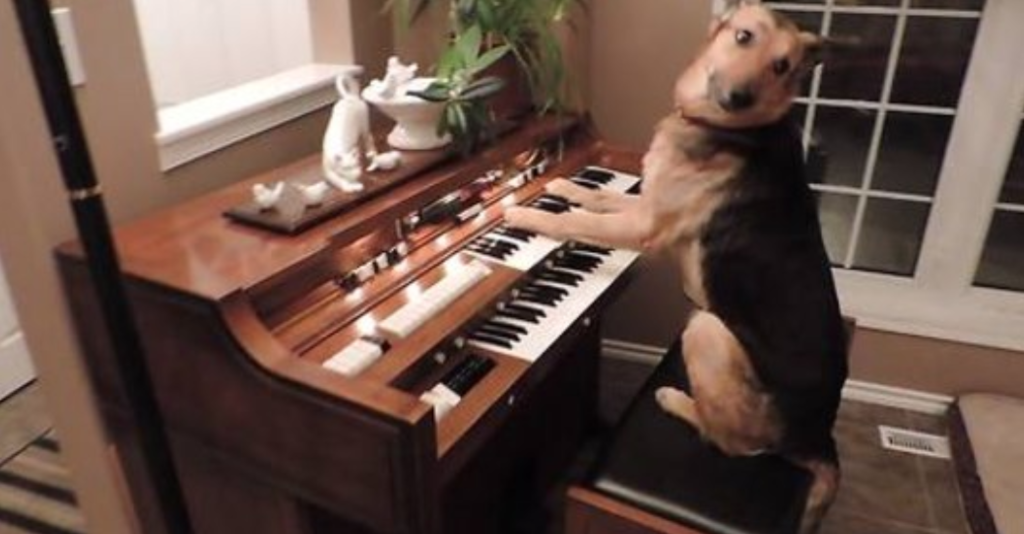 I’m convinced that everyone has got a frustrated musician within them. Even if you aren’t musically inclined career-wise, there’s at least a part of you that wishes you could play an instrument or sing. I personally wish I could play the piano. Or perhaps you can play an instrument or enjoy singing, you just never pursued it professionally. And that is ok because music is one of those things that makes everyone happy and brings people together.

And that love of music even extends to animals. How many of us have noticed that our pets seem to prefer certain kinds of music, or perhaps even have favorite songs that get them excited? Probably all of us. But how many of us have pets who can actually play, or at least attempt to play, an instrument? Perhaps a few of us.

For one owner in Edmonton, located in Alberta, Canada, they didn’t realize it, but when they adopted their German Shepherd- Border Collie mix, they actually had adopted a canine Mozart. In 2009, 6-year-old Sadie was adopted from the local animal shelter. Not long after she was adopted, her owner made the pleasant discovery that Sadie actually harbored a hidden talent for music – mainly being able to tickle the ivories. And it wasn’t just random noises on the piano, this talented pup managed to produce a couple of coherent notes!

Maybe even better than some of us humans.

In the beginning of the video, Sadie’s owner can be heard behind the camera giving the intelligent pooch cues for her to begin her performance. And her amazing party trick soon went viral online, gaining lots of attention from people who were blown away by Sadie’s intelligence.

Since Sadie is a German Shepherd-Border Collie mix, it makes sense why she was able to pick up these tricks so quickly and easily. Both breeds are well-known for being highly intelligent dogs. German Shepherds are so commonly used within law enforcement and the military, because of their intelligence and intense desire to please. Additionally, Border Collies have been said to be the most intelligent breed within the dog world. Therefore, a combination of these two would definitely produce a magical genius – which happened to be Sadie.

Once Sadie’s owner gave her instructions, she followed them perfectly. And it can be seen in the video as she jumped up onto the piano bench before playing each key perfectly. It might not have been perfect, but it was still a pretty good tune – and from a dog no doubt.

Not only was it a wonderful performance of intelligence, but it was adorable, to say the least. Sadie was absolutely precious throughout her performance, including the times that she accidentally messed up. You can hear the owner in the back ask, “Uh-oh, did you make a mistake?”

And while Sadie might have made a booboo, she even showed her embarrassment by temporarily covering her face as though ashamed that she’d made a “mistake with the keys.” There are no other words to describe that moment except for entirely charming. The whole video has everything that you’d want in a dog video: an adorable dog, a series of clever tricks, a musical performance, and a little bit of comedy. It’s one of those videos you’d find yourself rewatching several times.

While it’s not known exactly how Sadie’s owners went about teaching her the piano tricks, it is clear that they did an incredible job. Additionally, they certainly will be able to wow any future dinner party guests with a stirring performance by Sadie. How amazing would that be to be able to entertain guests with your dog’s musical abilities? How many of you would love to start teaching your dog piano?

Unfortunately, not everyone likes animals. Some people just prefer to never have a pet in

Fatal 8: Fruits And Vegetables Your Dog Should Avoid

Engage in Thoughtful Playtime With Your Dog

How to Keep Your Older Dog Active