Dog-Stracted Driving: How Your Dog Puts You At Risk 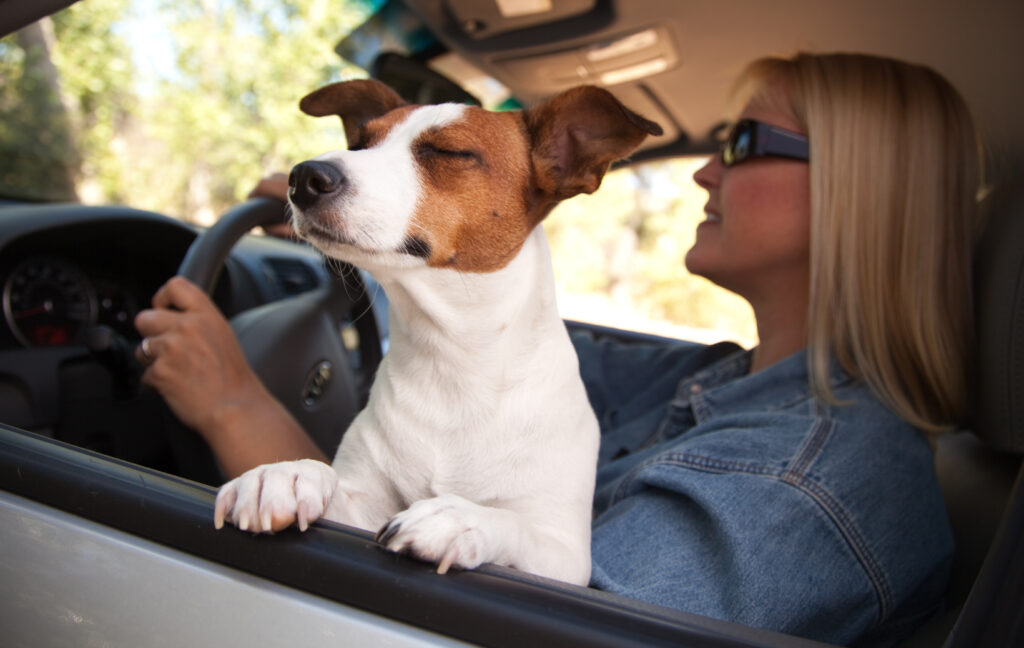 Recently, texting while driving has been severely under fire as more people using their smartphones behind the wheel end up in accidents. Of course, texting is by no means the only thing that can distract someone from the road. Talking on your phone is just as bad, as is fiddling with your stereo, reaching for a drink, using your GPS device, rubbernecking, turning to talk to someone else in the car… and, of course, unrestrained pets.

“But my dog isn’t a distraction,” you argue. Well, that’s a point that’s up for debate, and lawmakers in a number of states are coming down on the side of safety. Technically, only Hawaii has a specific law banning pets from riding in drivers’ laps, but many other states say that their distracted driving laws would also cover pets even though they aren’t mentioned directly.

Only 29 percent were willing to say that they really were distracted. Unfortunately, that sounds a little too close to the rationale that people use when they say they’ve driven after having a few drinks, but never while intoxicated. Just because it’s a problem doesn’t mean that you know it’s a problem.

Because of this, it seems useful to talk about several potential ways that we travel with dogs in our cars and the risks associated with each one.

Risks Associated with Dogs in Cars

Riding in Your Lap

Lawmakers in a number of areas have gotten so fed up with this one that they’re starting to have police fine people for it using current distracted driving laws. But driving with a dog in your lap isn’t just a distraction. It’s a potential obstacle for you and can be deadly for your pup.

How so? Imagine having to make a sharp turn when your dog is standing on your lap to look out the window. Or has his paws on the steering wheel. And even if Fido just sits there calmly, it’s dangerous for him because sudden movements could toss him around the car — an airbag could possibly even kill him.

Sitting or Standing in the Front Seat

This is a distraction because you might worry and take your attention off the road if your dog is moving around, or be more inclined to take your hand off the wheel to pet her. And, of course, unless your car has a mechanism that deactivates the passenger side airbag, deployment in an accident could crush your dog.

Traveling Without a Restraint

Technically this covers the first two traveling methods mentioned above, but it also refers to dogs left to roam around in the back seat unchecked. If you can hear your dog moving around and making noise but can’t see them, you’re far more likely to try to turn around and take your eyes off the road to see what they’re up to. And any unrestrained dog becomes a projectile if you have to slam on the brakes or someone hits you. That puts everyone in the car in danger.

Carriers or crates can be potentially good ways to drive your dog around, but you have to make sure that you buy the correct size. Too small and your pooch will be incredibly uncomfortable as they try to squish in. Too big and they can be tossed around and banged against the sides of the carrier. Neither one sounds very pleasant.

Additionally, it’s wise to strap carriers down so that they don’t go flying whenever the car makes sudden movements. It’s also important to choose a good quality crate, Cesar Millan prefers the ProLine dog crates, see Cesar’s tips here on what to look for when selecting a dog crate.

Obviously, we’re not talking about using the regular seatbelts in the car here, because those can actually cause more harm than good to your pets. Belted in means that you use pet restraints specifically designed to work in cars and keep pets safe. These tend to work like harnesses that attach to the car seat, so that when the restraint pulls on your dog, the force is spread out over the surface area of the harness and potentially keeps your dog from being hurt.

Did you notice that those last two choices didn’t really include much in the way of “risks” or distractions? That’s because while restraining your dog doesn’t completely eliminate the possibility of doggy distractions, it does limit them. Quite simply, on a car ride a restrained dog is a safer, happier dog, and you have a lot less to worry about.

How does your dog usually ride in your car? Tell us in the comments.