Have You Hugged Your Dog Today?

There’s a subject we’ve covered on my website multiple times, and it’s always controversial — the kind of story that starts heated discussions in the comments, with two very divided camps on the issue.

No, we haven’t been doing politics! And while stories about pit bulls, breed-specific legislation, spay and neuter, and clothes for dogs always start a lively pro and con discussion, this particular subject seems to be very touchy with a lot of people and I think that I may be in the minority in my view.

But, as has happened before, somebody finally took a look at the evidence behind what I was saying, and I now have a defender in the noted psychologist Stanley Coren, Ph.D., who has written extensively on dogs — and he agrees with my point of view on this very controversial question.

Should I Hug My Dog?

For most people, it’s not even a yes or no question. Ask them if they should, and they’ll tell you that they do, all the time, and that their dog loves it. Whether they’re picking up a teacup Yorkie and giving a hug with two fingers or struggling to get their arms all the way around a Great Dane, people love to show affection to their dogs the same way they show it to other humans — with a big hug.

And if you ask almost anyone who’s hugging their dog what the dog thinks of it, the answer will be some version of, “Oh, she loves it because then she knows I love her.” 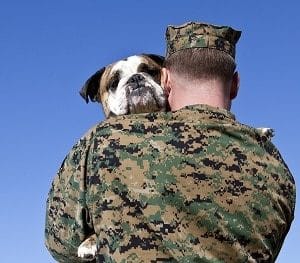 As they say, “Don’t shoot the messenger,” but I can tell you that there are very few dogs that actually like being hugged by humans. You may be one of the people with one of those dogs, but for the vast majority of dogs, a hug is not something they look forward to.

See it from the dog’s point of view. While they can grab things between their front legs, they generally only do it when they are play-fighting, actually fighting, or humping something — and those actions are all about dominance, not affection. And to animals in general, being suddenly grabbed around the body is usually a sign that a predator has gotten hold of them, in which case it’s time to fight to the death in order to escape.

A person or animal that’s fighting to the death really isn’t in the mood to give an affectionate hug. At least dogs have learned that humans are generally not predators, so they don’t put up a violent fight when someone hugs them, but they can squirm and struggle or show all the signs of being in a fight-or-flight mode, and this is exactly what Dr. Coren observed.

He looked at photos of a whole bunch of people hugging dogs and studied the dogs’ body language in those photos. Now, if you know me you know that I teach that animals communicate with energy and body language, and if you can read those you can understand exactly what an animal is saying to you. It’s a skill that I have, and so do Dr. Coren and his researchers.

In nearly 82% of the photos they looked at, the dogs were saying, “Stop it, I don’t like this, let go of me!” They weren’t so much saying it in words, of course, but the message came through clearly in their energy and body language. They were showing all the signs of stress and anxiety.

When a dog is stressed or anxious, it will try to get away from or avoid the thing that is stressing it out. Since they’re being held in a hug, a dog will start to show stress by looking away from the person hugging them and possibly twisting their body in the other direction before going stiff. They may squint submissively or open their eyes wide and turn them so you can see the whites, which are normally not visible. In most cases, the dog’s ears will droop. Some may show submissive licking behavior.

Since the dog may not be struggling or trying to bite if the person hugging it is a pack member, it can be very easy for the humans to misinterpret a dog’s submissive signs of anxiety as returning affection — especially if the dog starts licking submissively or panting.

In case you’re wondering, only 7.6% of dogs that Coren studied showed signs of actually being comfortable with being hugged. The rest of the dogs were either neutral or ambiguous. This means that if you have a dog that legitimately likes being hugged, you have a very rare dog indeed.

I’ve been saying it for years — most dogs do not like being held and hugged. Once again, science catches up and confirms it. If you love your dog, it’s okay if you don’t show it with a hug. You’ve already shown it to your dog by feeling it.