It was a gorgeous Southern California spring morning, and for a few hours 18 dogs forgot they were homeless. Axel, a buff three year-old American Staffordshire terrier mix, led the pack of dogs, staff, and volunteers from the Best Friends Animal Society Pet Adoption and Spay and Neuter Center on an enrichment hike up the four mile trail at O’Melveny Park, in Granada Hills, California.

At first, Axel wasn’t quite sure what to make of his surroundings. He barked at other dogs, dragged his handler up the trail, and manically sniffed bushes and grass. By the time the group made it to the halfway point, however, Axel was a different dog, lounging by his handler’s side, calm and content.

The dogs in residence at Best Friends are pulled from one of six Los Angeles Animal Services shelters and stay at the no-kill center until adopted. Launched in January 2012, the center is operated by Best Friends Animal Society, the only national animal welfare organization focused exclusively on ending the killing of dogs and cats in America’s shelters.

“The hike is exactly the sort of enrichment we want our dogs to have,” says adoption manager Mike Harmon. “It gives them a break from the shelter environment, and they get experience out in the real world that will better prepare them for adoption.”

Some dogs at the center, including Axel, have earned “brown paw” designations for being slightly more challenging to handle because of sheer strength or assertiveness issues. Volunteers handling brown paw dogs must have additional training.

Pamela Brumbaugh, a volunteer since the center opened, is one such brown paw volunteer. She came up with the group hike idea after a trek through the park with her own dogs. Since she already participated in play groups, training classes, and mobile adoptions at the center, Brumbaugh figured, Why not a hike outside? Once she pitched the idea, which the center immediately approved, all she needed were some qualified handlers.

On the first enrichment hike, back in October 2013, Brumbaugh was thrilled to have an army of brown paw volunteers, including center staff who showed up at 6:30 a.m. to load dogs and transport them to the park. “Everyone who participated was just one hundred percent in and so excited and positive,” she said.

After a fifteen minute ride to the park, the dogs got to doing what they do best — sniffing and exploring the natural world.

“Few things make a dog as happy as using its nose, and the hike is an aroma jamboree,” Brumbaugh says. “In addition to that, they can exercise, and they had the chance to accomplish something as part of a really big pack — all things that help them feel happy.”

Above all, the dogs got to relax and work out their anxieties from living in a shelter environment. The longer these dogs have to wait before they find a home, the more frustrated they get, extending the negative cycle.

Such was the case for Lily. The three year-old pit bull mix constantly spun in her kennel, not an appealing sight for potential adopters. She had been at the center for nearly eighteen months when she went on her first enrichment hike.

After the trek, still mellow from her morning, she was spotted by a couple, who admired her unusual markings, which included an eyebrow that gave her a cynical look and a heart-shaped nose. The couple took her home.

“The hike is one component of the behavior work that’s necessary to keep the dogs balanced while they wait for their forever homes,” Brumbaugh says. “Being adopted after the hike is truly icing on the cake.”

Adoptions are also a critical component to turning Los Angeles into the nation’s largest no-kill city by 2017, the mission behind Best Friends’ No Kill Los Angeles (NKLA) initiative. According to Marc Peralta, executive director of Best Friends Animal Society Los Angeles, L.A. has an estimated eighty-three percent save rate for dogs; ninety percent is the recognized benchmark for a no-kill community.

“Many of the dogs remaining at shelters and centers like ours are similar to ones you’ll see on the hike — larger dogs needing regular exercise to be at their best,” Peralta says. “The enrichment hike is an incredible example of how Los Angeles animal lovers are working together to give these homeless dogs a second chance at finding a fantastic new life.”

Do you have a favorite place to go on pack walks with your dogs? Let us know in the comments.

How To Find Your ‘A-Ha’ Moment 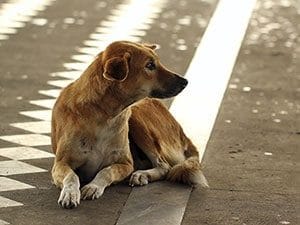 Lost! What To Do If Your Dog Goes Missing