Inside Your Dog’s Mind: What They Feel For You

It’s something we dog lovers have likely pondered any number of times when our pet looks at us with those wise, wide eyes: “I wonder what he’s thinking…”

Two recent studies are moving us closer than ever to a definitive answer.

In a UK study, two researchers at Goldsmiths College in London, Deborah Custance and Jennifer Mayer, set out to determine if dogs are capable of empathy — an ability to truly understand emotion.

“I had talked to so many people who have dogs who say, ‘it’s like my dog is trying to comfort me,’” says Custance. Though she admits her own dog never offered comfort — “my dog was very hard-hearted,” she laughs — she set out to study whether dogs were even capable of caring in the way so many of us assume that they are.

They gathered a group of largely untrained pets, mostly mixed breeds and equally divided between males and females. Then they set up a situation with the dog’s owner and a stranger to the dog. The owner and the stranger would alternately talk, hum in an odd way, or cry. The researchers wanted to see how the dogs reacted.

The dogs responded — 15 of the 18 in the study — by seeking out the person in distress, even if that person was the stranger. “On the surface, it certainly seemed as if the dogs were demonstrating empathy,” says Custance, who thought that if the dogs were seeking comfort for themselves they would go to their caretaker. She admits that the study raises other questions: What about other emotions, such as pleasure or anger? Would dogs respond differently to children?

However, the findings are being interpreted by many as proof that we’re more than just a meal ticket for our dogs. This doesn’t surprise Custance, who acknowledges that dog lovers want to believe it. “We were so careful to say there’s more work to be done.” Nonetheless, she says, “We have benefitted greatly from dogs. It’s definitely a symbiotic relationship.”

Gregory S. Berns, director of the Emory Center for Neuropolicy in Atlanta, Georgia, and a dog lover himself, might soon be able to provide definitive evidence of a dog’s feelings. He was inspired to take a peek into the canine cranium after learning about the heroic Navy dog that helped take down Osama bin Laden. He noted that the dog had not only learned to endure hostile conditions but apparently to enjoy it. What, he wondered, was the dog thinking?

“Why do an fMRI on a dog?” wrote Berns in an article on Psychology Today’s website. “The answer is obvious: To see what they think.”

He spent a year, together with an assistant and a dog trainer, to prepare dogs for the fMRI. Since the Navy dog had learned to handle the noise of a helicopter, Burns prepared dogs for the noise of the procedure by having them trained to wear ear plugs. He also, under strict ethical guidelines to ensure no dogs were harmed and were free to “quit” the experiment at any time, had the dogs trained to stay perfectly still in the scanner. Even a slight movement would ruin the image.

It took a year, but Berns reports that they were successful on the anniversary of the bin Laden mission. The unsurprising discovery was that the reward center of dogs’ brains lit up when there was a hand signal indicating they would receive a hot dog treat. Far more interesting, Berns and his team discovered that dogs’ brains are much more responsive when information comes from humans, as opposed to inanimate signals, like Pavlov’s famous bells. “They like looking at us, just as we like looking at them,” writes Berns. He goes on to say that this ability to map their brains provides the tool to answer questions relating to dogs’ ability to feel empathy.

“I wonder what he’s thinking…” might not need pondering much longer.

Enormous Great Dane Often Gets Mistaken For A Horse

Owners of big dogs probably know that sometimes your pooch will get mistaken for some...
June 18, 2015

One of the questions I get asked in almost every interview is, “Where did your... 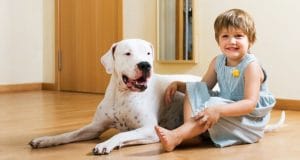 Child With Fear Of Dogs 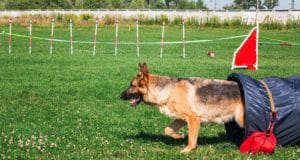 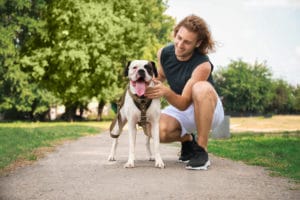