This is the first in our series about Service Dogs and the important work they do.

Service dogs assist individuals in a variety of ways. There are the more commonly recognized guide dogs that assist the blind or visually impaired, as well as dogs that assist the deaf or hard of hearing by alerting their owners of alarms and other important sounds. Service dogs also assist the physically disabled by retrieving objects, pulling wheel chairs, turning off light switches and performing other tasks to help in everyday activities.

In addition, there are service dogs that assist with invisible disabilities, such as diabetes and anxiety, alerting a person of a physiological change. These dogs are able to sense a variation within their owners and react accordingly, for instance seeking out another human in the case of their owner collapsing into a seizure.

We wanted to learn more about how service dogs help their owners on an everyday and personal basis, so we asked several service dog owners to share their stories with us.

Over the next four weeks, we will learn more about these various service dog realities, so stay tuned!

Sister Elizabeth Segleau had lost her hearing in 2006. She underwent surgery for two cochlear implants, electronic devices that provide a sense of sound for those who are severely hard of hearing, but she knew that these devices would not help in the hearing of non-speech sounds. Sr. Elizabeth was worried about discerning far off noises such as car horns and alarms, and was particularly concerned about taking the implants out at night, rendering her completely deaf.

In 2007, Sr. Elizabeth moved out on her own, quickly realizing the challenges she faced. She decided to look into acquiring a service dog. “I wanted to learn all I could about hearing dogs and see if this was something that would be of help to me with daily life needs,” said Sr. Elizabeth about her initial interest.

She connected with Power Paws Assistance Dogs in Scottsdale, AZ, and received Johnny in September 2008.

Johnny was specifically trained to alert Sr. Elizabeth of any alarms, people approaching, cars coming from behind, people calling out to her, and visitors at the door. Johnny’s arrival at Sr. Elizabeth’s home was perfectly timed, for not four months into living together, Johnny alerted her of a fire that was going on right outside her apartment, which she did not hear nor smell.

Two years later, Johnny continues to help Sr. Elizabeth maintain her independence. “Once you lose certain abilities, life becomes more of a challenge and sometimes a complete obstacle. Our partners help us maneuver through life without having to depend on others.”

As a former opera singer, Blayne E. Douglas struggled with the loss of his hearing. Although only partially deaf, Blayne had difficulty functioning and lost all ambition, remaining indoors for nearly 10 years. It was only until he met his soon-to-be service dog, Maximus Decimus Meridius, that Blayne reemerged into society and began living again.

Maximus and Blayne did not meet under traditional service dog circumstances. Blayne had noticed Maximus in the back of a locked car of a breeder who was peddling puppies door-to-door. In an effort to save Maximus from dying in the scorching back seat (unfortunately another dog had died in the seat next to him), Blayne broke the car window, removed the dog, and administered immediate CPR. The police that arrived on the scene evaluated the troubling situation, and allowed Blayne to take the puppy as his own.

Nearly two months into their partnership, Blayne and Maximus encountered a rattlesnake on a walk. Maximus immediately went into guardian mode and warned Blayne of the danger ahead, of which Blayne did not hear nor see. It was at this moment that Blayne decided to get the appropriate training to allow Maximus to act as his service dog. 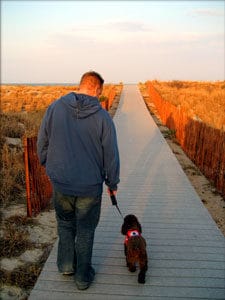 Five years later, Maximus has taken on the role of Blayne’s service dog, alerting him to any alarms or distant sounds. “I am eternally grateful for the enormous strength this little, Miniature Chocolate Poodle has given me,” said Blayne. “His bravery is ten times that of my own and he will never let me down. I know the same is true for him.”

In addition to telling their personal stories, each owner wanted to help clarify some common misconceptions and educate the public on using a service dog. Here is what they had to say:

— Most people don’t realize that service dogs love to do their job. Service dogs still eat, sleep, go to the bathroom and play, they’re just trained to do specific tasks to help their handler.
–Most handlers aren’t afraid to answer questions and welcome the opportunity to educate others about their service dogs, so don’t be afraid to talk to them!
— People should understand that a calm, focused dog is not a sad dog. The reason that a working dog doesn’t seem to care about a random person or dog is because they are working.
— Dogs of all breeds and sizes can be service dogs. Just because a service dog may be smaller than the stereotypical service dog (i.e. Shepherds, Retrievers and Labs), doesn’t mean that that dog and handler should not be treated with the same respect as a handler that has a larger dog, nor does size measure the ability or service provided.
— It is a huge responsibility to have a service dog. They do not, as sometimes perceived, take care of themselves.
— They are dogs, not robots, and just like people they can sometimes make mistakes. This doesn’t mean that they were not properly trained.
— It’s important when you see a service dog working in uniform that you don’t interfere with his or her task. Take a look at the badges on their vest. Some will say it’s okay to ask before petting while others may say not to pet them at all. Don’t be offended if your request to interact with a service dog is declined. Their handler may not be comfortable interacting with unfamiliar people or they may just be on their way to their destination without the time to stop and chat.

Check out Part II: Hypoglycemia and Diabetes Service Dogs of the series.

The Truth About Service Dogs

Guide Dog School 2: And His Name Is…