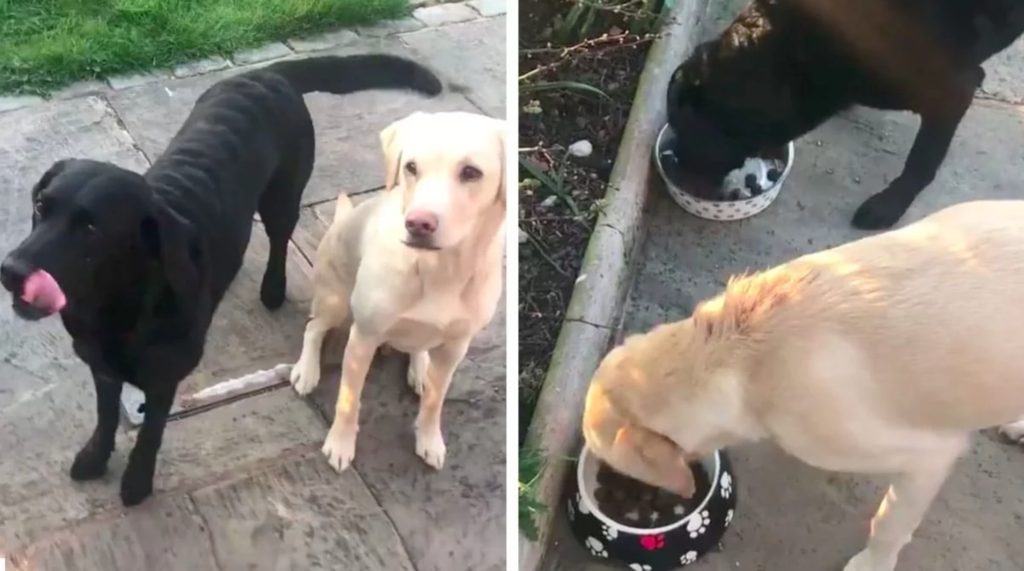 Sports fans everywhere are reeling from the recent pandemic’s shut down of all matches everywhere. But no sports fan is suffering more than the broadcasters, who have recently found themselves with nothing to do, given that all games and matches have been called off until further notice.

However, Scottish BBC broadcaster, Andrew Cotter, decided to keep his commentating skills up to par with a hilarious video. Cotter, who mainly commentates on golf and rugby events, posted a video to Twitter which featured his most recent quarantine hobby.

Appropriately captioned as “I was bored,” Cotter is heard in the video lively narrating meal time between his dogs, Olive and Mable, as they race to finish their food.

The engaging mealtime face-off featured his two Labradors, eager to get chowing.

After Cotter sets down the bowls, the two dogs are off, chowing down their meal with a record time of 60 seconds, and Olive pulls a win over the former reigning champion, Mable.

Despite the stiff competition, these two dinner-time racers are still “great friends.”

The hilarious Tweet was shared on the 27th of March, and very quickly received 58,600 retweets and counting, as well as more than 200,000 likes. Impressively, it was viewed 5.9 million times, and the views are still going.

As Cotter shared with his 69,000 Twitter followers, “join us again tomorrow for some more live coverage of a snooze on the sofa.”

We seriously can’t wait for that video addition!

You can watch his dinner narration below:

The video garnered plenty of responses, including some high-profile celebrities commented on the post. Deadpool actor, Ryan Reynolds, quoted back a sentence from the video followed up by a couple laughing face emojis.

Cotter’s fellow broadcaster, Dan Walker, also had some funny things to say about the video, commenting, “Cotter… I love that this is going to be the highlight of your career. We need a sequel.”

Cotter… I love that this is going to be the highlight of your career. We need a sequel
😂😂😂

Even former footballer Gary Lineker retweeted the post and said that Cotter is “one of the very best commentators we have,” as well as referring to the video as “great stuff.”

Great stuff from one of the very best commentators we have. https://t.co/by1SkjkgGq

The following day, Cotter followed up with a picture of the two dogs sleeping, saying, “this has changed them.”

This has changed them. pic.twitter.com/pJ3m7sAKb7

Not going to lie, I’m a little disappointed as we were promised a commentary video on nap time!