The 5 Stages Of A Baby-Canine Friendship (Part 2) 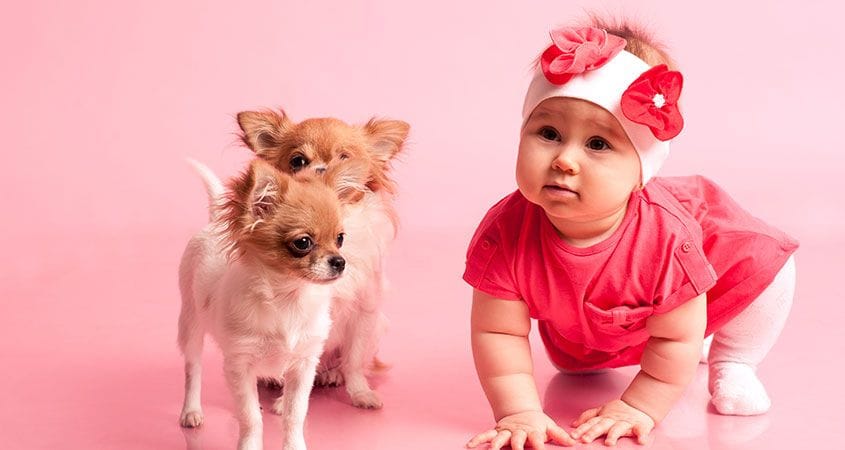 Have you added a baby to your pack recently? Then you know that the challenges of the baby-canine relationship extend well beyond that initial meeting.

In the early stages of development, you’ll encounter the Newborn and the Baby Alarm, and then the Sitter and the Food Thief, as discussed in part 1 — but things only get more interesting as your baby continues to develop.

Here are just a few more dynamics you may encounter as a new parent.

Stage 3: The crawler and the test subject

Uh-oh! That dog better watch out — baby’s on the move! And he may head directly to his canine pack member to get some hands-on time.

This is a great opportunity for the baby and the dog to get better acquainted. After all, they have a lot in common right now as they both move around adeptly on all fours. But it’s also crucial to monitor all interactions. It’s not too early to direct your baby about the right way to pet a dog. Encourage gentle behaviors, and discourage pulling and poking. Avoid the top of the head in favor of under the chin.

Your baby doesn’t understand explanations like, “That hurts the doggy.” Keep it simple with a firm “No” for behavior you want to discourage, and then demonstrate the correct behavior. Remember, babies are sponges — be aware of how you interact with your dog because you’re teaching your baby how to treat your dog, whether or not you intend to.

It’s also important to let your dog know what behaviors you’d like to see around the baby. Your dog may be excited to get some up-close time with the baby, but be careful not to allow too much excitement around the baby. Encourage relaxed, calm energy, or you’ll run into problems during the next stage.

Stage 4: The walker and the bulldozer

Baby’s first steps often drastically shift his dynamic with your dog. A crawler may have no problem with a happy dog approaching for a kiss, but a new walker can be easily knocked over by the same behavior. If you’ve encouraged calm-submissive behavior around your baby during early stages, hopefully your dog’s on the right path. But again, monitoring interactions is the key. Expect your baby to be bowled over now and then. It’s part of the growing process for dog and baby.

Does the baby get really upset when the dog is behaving badly? Sometimes it’s not the dog’s behavior that’s upsetting the baby, it’s your behavior! Your angry or anxious energy can negatively impact both the dog and the baby. For example, when your baby is knocked over by an excited pup, don’t get angry; instead give a calm-assertive correction. Both dog and baby will react better, and you may be surprised to find your baby mirroring your behavior in the future.

Stage 5: The toddler and the playmate

Now that your little one’s footing is getting a little steadier, you may feel ready to introduce playtime together during this stage. If your dog doesn’t have issues with possessiveness over toys, a great activity at this stage is fetch.

Find a soft ball that the baby can throw for your dog. (It’s important that the ball is soft because it may end up landing directly on your dog’s head… repeatedly!) Ask your dog to sit calmly. Then give the ball to your toddler and ask him to throw. It’s likely that the ball won’t go far, but you may find that your dog has met his match. Don’t be surprised if you find that both baby and dog look at you with those sweet eyes begging for, “Just one more throw, Mom!”

In order to have a well-behaved, balanced dog, every Pack Leader needs to understand how

Gema is a Great Dane mix puppy that may have been born different, but she

How To Start Walking And Training A Puppy

You just got your new puppy a few days ago, and you’re itching to

Things You Can Do To Extend Your Dog’s Life

Acute Diarrhea In Dogs and How to Treat It