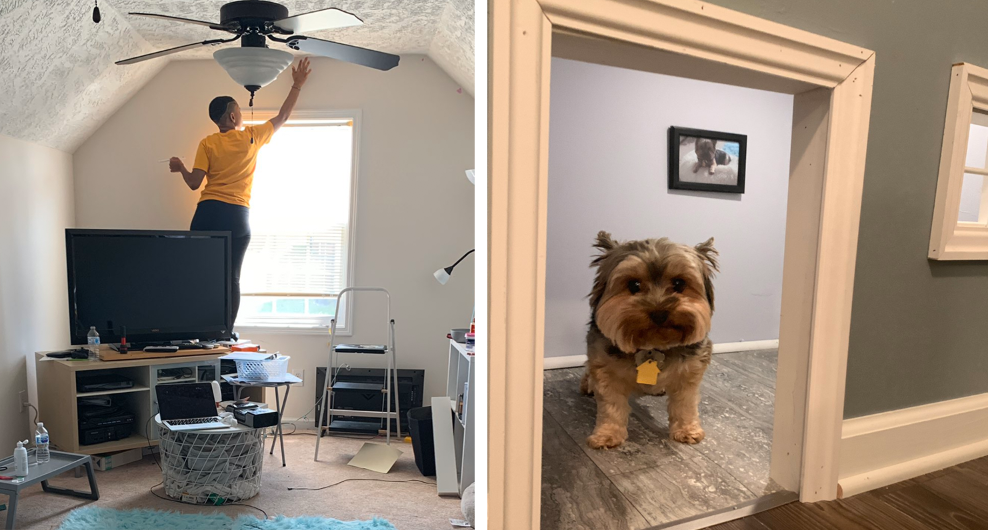 Having pets is a big responsibility. They rely on us for everything, and many of us pet owners probably view our pets as our babies, which means we just want the best for them. That means making sure that they get their own space. And one woman went above and beyond to make sure her pets felt completely loved with their brand new room.

The woman’s mom posted to Twitter the painstaking task her daughter underwent to transform her spare room into a dog room for her two Yorkshire Terriers, Ginger and Fergie.

Her mom, Diane, wrote on Twitter, “I was going to sneak upstairs to see how Kennedi’s redecorating of her game room/bonus room was coming along but Ginger and Fergie were standing guard at the top of the stairs.”

Diane further explained that when her daughter Kennedi got the idea to redecorate the room, she herself decided to add a couple creative twists, like a window seat.

Diane said, “So I built one with storage and 2 built-in dog houses.”

It was a brilliant addition since not only did it turn out to be a very adorable window seat for the doggie room, but also doubled as extra storage.

Kennedi had Diane’s help for the majority of the project that they created for Ginger and Fergie.

Diane shared a sneaky photo of her daughter taking a break with her dogs, saying, “Kennedi helped a bit… Then she had to rest.”

Of course, the dogs seemed to know what was going on, and the two seemed to be quite grateful. Ginger and Fergie were more than happy to offer the two women loads of kisses and cuddles as they powered through the construction.

All said and done, the project took them 15 days. And it went by very quickly. On the 9th day, the women had already painted the walls and installed the floors. By the 12th day, they’d completely transformed the spare room into a brand new one.

From there it was just little minor adjustments and touches before they were able to unveil the finished project to the world. Of course, along the way, they were happy to share updates of their progress with those on social media.

The dogs were so grateful at the end of it all, perhaps knowing that all this construction was for them. And they definitely are spoiled little pups. But who can blame Kennedi? We’d all probably do the same for our dogs.

A ceiling light and a picture has been added to each house. Up next, we have to find a tiny couch for each. https://t.co/y6gO2MIsTd pic.twitter.com/vM8LJR8xjc