Working Dogs Remind Me Why I Do What I Do

There’s a myth that New Zealand’s sheep population outnumbers people by twenty to one. In reality, it’s more like eight sheep for every person, but sheep herding is still big business—New Zealand has the second largest shepherding industry in the world, right behind Australia. In case you’re wondering, there are about 57 sheep per dog, and I had the opportunity to observe some pretty amazing dogs herding sheep at SheepWorld.

Being in the middle of the sheep in front of the dogs reminded me again why I do what I do. I’m helping dog owners understand why it’s so important that their dogs have a purpose, and that purpose can be found in a job. A job can be as simple as your dog following you, listening to you, carrying things for you, alerting you, agility training, or wearing a backpack. If you have a chance, enlist your dog in any kind of dog activity. Once they find a purpose, they will be happy.

Watching the working dogs in action, it was fascinating to me that the house dogs at SheepWorld don’t know how to behave properly because they had no jobs. These dogs–a poodle mix and a beagle mix–belonged to the farmer’s kids, but they were not allowed to be off-leash because they couldn’t be trusted. The house dogs would chase the chickens or get hurt by the sheep, but the trained working dogs knew exactly how to respect the chicken and work with the sheep, no leash required.

I asked Rob, who was explaining how the dogs worked, what the hardest thing to teach them was, and he told me, “The hardest thing for them is to detach themselves from me.” Sheepherding works by the dog forcing the sheep to move away from it and toward the shepherd, so the sheep are in between them and the dog has to learn how to go away from his pack leader.

I asked this question because the most difficult thing for a dog in modern society is to learn to live by himself or to stay away from you. And that’s what people eventually call separation anxiety. A dog trainer that I highly respect has written a great article on separation anxiety: Martin Deeley.

People have asked me how the human/dog relationship is different here from how it is in America. In Australia and New Zealand, they do the same thing — affection, affection, affection. A dog doesn’t know if its owner is rich or poor, or what part of the world they live in. A dog only knows how it’s being treated, and is either balanced or not. 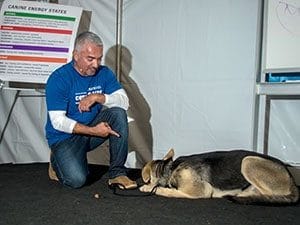