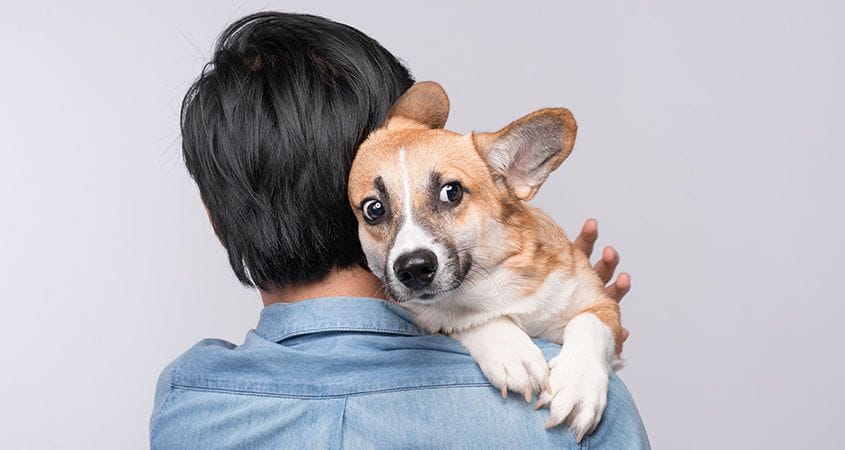 One of the common fears people report their dogs having is of men in general. This seems ironic given that dogs are known as “man’s best friend,” but if there’s one class of people that some dogs seem to fear, it would be men. So why is this?

There’s an old saying—a dog that’s been burned is afraid of a cold stove—and there’s some truth in it. Because dogs live by their instincts, it can take as little as one bad experience with something to make a dog forever fearful of anything similar.

While it’s a bad thing when humans do it, dogs do generalize. So, for example, if a broom falls over and almost hits a puppy, this can lead to an adult dog that’s afraid of anything that looks like a stick.

However, the vast majority of men do not go around randomly scaring dogs. So why is this such a common fear?

Although behaviorists have studied the issue, there’s no clear reason why dogs would naturally be more afraid of men than they are of women, but there are some possibilities, the most likely of which is that the dog was not exposed to or socialized with enough men while she was a puppy, so they are still unusual to her.

First men are generally bigger and louder than women, with deeper voices. To a dog, big and loud are both threats, so they would naturally tend to shy away from this energy.

Another possibility is that men’s and women’s scents are very different to a dog, due to both hormones and different kinds of fragrances in personal care products. In the dog world, puppies are raised by their mothers and the father is rarely even around. Therefore, the female smell of estrogen is something that puppies are exposed to from an early age, and this smell is also associated with their first food source — nursing. Their mother’s scent equals safety.

You’ve probably seen a full-grown adult male drop to the floor and try to initiate play with a new dog the way another dog would—with a bow and enthusiastic energy. The problem is that the average adult male is bigger than most adult dogs, so even though the approach is friendly, the appearance can be threatening. Meanwhile, instead of initiating play, women often offer an invitation, so the dogs don’t feel threatened.

But, the final answer is this: scientifically, we really don’t know why dogs tend to be more afraid of men than women, and everything is still conjecture.

None of which is helpful, of course, if your dog is afraid of men…

But my dog is afraid of men, so now what?

Regardless of the cause, there are definite steps you can take to cure your dog’s fear of men. Keep in mind that rehabilitating a fearful dog can be a more difficult process than rehabilitating an aggressive dog. But the good news is that it can be done. Here’s how to proceed.

Does your dog have a very specific fear, like men with beards, kids on skateboards, reflections, etc.? Tell us about them — and what you’ve done to help your dog — in the comments.

They say curiosity killed the cat, but satisfaction brought him back. But when it comes

Why Dog Bites Happen And How To Stop Dog Biting