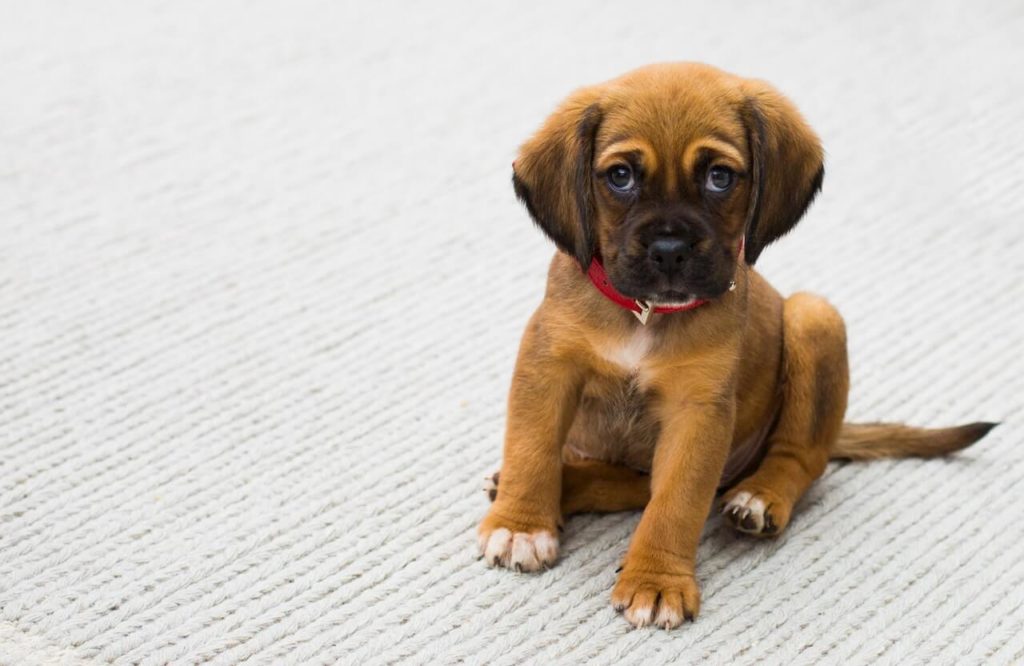 Approaching a fearful canine can be an intimidating experience for both you and the dog. Whether it’s your own pup that is fearful or a dog you just met in the neighborhood, approaching a fearful dog requires attentive awareness and an understanding of the dog’s behavior. If you’re unsure how to approach a fearful dog, you have come to the right place. Today, we’ll cover the details on how to help a fearful dog gain trust in you and how to stay safe in the process. We’ll also share a helpful video from Cesar that explains how to approach a

Cesar, I have a two-year-old Pomeranian who is afraid of everything; and so worried about things falling on him.  Although since I’ve had him (about one year), nothing has fallen on him.  He even approaches his food dish as if a snake will attack at any minute. Drinking water is the same, he is always prepared to run away. I have tried to show calm and assertive direction and a matter-of-fact attitude. Is there anything more I can do? Alice Jackson Read Cesar’s Advice Below Dear Alice, This sounds like a self-esteem problem, so you must approach it delicately. We want

How to Deal with a Fearful Dog The U.S. President Franklin Roosevelt once said, “The only thing we have to fear is fear itself.” He said this in his first inaugural speech in 1933, when the country was in the middle of the worst depression it had ever experienced, but his words still apply to this day. He further described that fear as “nameless, unreasoning, unjustified terror,” which makes it sound pretty scary. When we feel fear ourselves, it can be paralyzing, preventing us from doing anything about it. And when we see other humans in fear, particularly children, our

One of the common fears people report their dogs having is of men in general. This seems ironic given that dogs are known as “man’s best friend,” but if there’s one class of people that some dogs seem to fear, it would be men. So why is this? There’s an old saying—a dog that’s been burned is afraid of a cold stove—and there’s some truth in it. Because dogs live by their instincts, it can take as little as one bad experience with something to make a dog forever fearful of anything similar. While it’s a bad thing when humans

Keeping Your Dog Safe When The Fireworks Start

Some dogs have no problem with the sight and sound of fireworks if they’ve been desensitized — hunting dogs, for example, grow used to the sounds and smells of hunting rifles and gun powder. Most dogs, however, are not used to these things, so the Fourth of July can be a particularly stressful holiday for dogs and their humans alike. More pets run away on the Fourth of July than any other day, so you should take extra steps to ensure their safety. Keep a keen eye on your dog during the commotion, and make sure your pet is wearing

Scared Of Sounds Inaudible To Humans

Do You Have Issues With Your Dog When it Comes to Sounds We Humans Cannot Hear? Below you will find a letter from one of our fans and my answer in how to deal with this issue. _____ Hi there, My dilemma is my nine-year-old Border/Queensland mix Scarlet has trouble with noises.I do my best to redirect and distract. It seems to do her some good to put on the leash and ‘work her’ while she is troubled. This is something that I am still working on, providing that I can hear what she hears. Sometime there are ‘noises’ that I can’t hear

Insecure On The Walk

Dear Cesar, I have a new Doberman named Burt. He’s a beautiful show quality dog from a long line of champions, just 12 weeks old and a wonderful dog, but when it comes to taking walks, his behavior is somewhat odd. When I leave the house he’ll walk for about a half block and then begin the “sit down and freeze.” A walk around just two blocks can take 35 minutes. Oddly enough, I can take him to a busy, confusing place like Petsmart or drive him to the downtown shopping area or park and he walks just fine, but

Dog Afraid Of Telephone And Other Devices

Hello Mr. Millan, We have four dogs, no real behavior issues other than the smallest one has become very afraid of telephones. It started with cell phones, but now he runs outside if you so much as pick up a phone (we have a dog door and a pen), and it takes much coaxing to get him to come inside, even though our weather here has been in the 20s and he has little fur. He will lay in the snow shivering. What can we do to get him past this? He is afraid of other things (vacuum, hairdryer, cameras,

Great Dane Afraid And Running Away On The Walk

Hi Cesar! We have a 115-lb female Great Dane, Cleopatre. She is 3 years old. We just began three months ago to walk her on-leash daily for forty minutes. She was doing fine until we met a group of nine unleashed dogs barking at us like crazy.At one point, I got scared.  Now, she reacts in a way that I can’t go alone with her; she’s too strong.  Each time we meet one of them, precisely the black Lab, she goes nuts. We can’t control her at all, or, if she could run at his house, she will do it.