As a conscientious dog owner, you work hard to fit their daily walks into your schedule. It doesn’t matter if you have to get up early or do it after the sun has gone down because it’s about what’s best for your dogs. This attitude is to be applauded, but don’t forget about safety! A Reliable Leash and Dog Collar You want to ensure the leash and collar are appropriate for the size and strength of your dog. The last thing you want is for him to break free and try to run across a busy street or go after

How to Stop Dog From Pulling

6 Tips For Mastering The Dog Walk

Here are six dog training tips on how to walk your dog and master the dog walk. When I’m out with my dog pack, I often walk about ten dogs at a time, sometimes even off-leash if I’m in a safe area. People are amazed by this, but it’s simple: the dogs see me as their pack leader. This is why dogs follow me wherever I go. Here are 6 Tips for Mastering the Dog Walk Walk in Front of Your Dog Walking in front of your dog allows you to be seen as the pack leader. Conversely, if your

Dogs need walks. Walks provide them with exercise, help you assert your position as Pack Leader, and bring some fun to the day for both of you. But what do you do when that fun fades and you and your dog seem to just be going through the motions, bored and waiting for the walk to be over so you can go back home? It doesn’t have to be this way, and we’ve come up with five dog-walk tips designed to alleviate boredom for both you and your pup. Take the road less traveled Lots of dog lovers come up

Many people don’t take their dogs on as many dog walks as they should because they have problems keeping their dog under control. Whether it’s the dog pulling, lunging, or other dog problems, there’s hope! Here are my tips on how to walk your dog, stay in control, and make sure you have the right dog collar and leash. Please take time this month to work on the dog walk. Cesar Gives Tips and Tricks Be Aware of Your Energy and Body Language While Walking Dog Make sure you are communicating a message that says, ‘I am the pack leader!’

Are You Walking The Walk?

You may or may not have heard the term “Lassie Effect,” but did you know that it has two meanings? In the older sense, it refers to a particular breed — like a collie — becoming popular because of a film or TV show.  It’s named after that famous television dog Lassie, of course, but the effect has been seen with other breeds. For example, there was a surge in popularity of a certain breed after the film Beverly Hills Chihuahua was released. But there’s another meaning to “Lassie Effect,” that’s becoming more popular, and it refers to the positive

One of the exercises that Cesar has everyone who attends his Fundamentals of Dog Behavior and Training I course do is the pack walk. One-by-one, everybody takes charge and walks a pack of eight or more dogs, all at once. It can be an inspiring sight as someone who had trouble walking just one dog of their own suddenly takes the reins and leads a whole bunch of them. If you’re having difficulty walking your dog, you may wonder how it’s possible to walk a whole lot of them at once, but it’s not as daunting as it sounds. Here 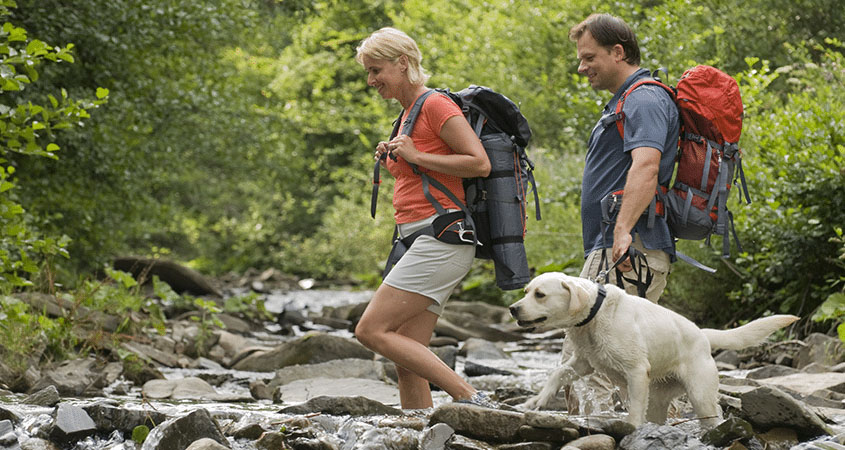 Go The Distance! Hiking With Your Dog

John Muir once said, “In every walk with nature one receives far more than he seeks.” I couldn’t agree more with this statement, which is why hiking with the pack is one of my favorite things to do. Not only do my dogs enjoy hiking along the trails, but the level of happiness I feel on those mornings is beyond incredible! It’s one of those moments when I feel completely relaxed and have absolute silence within me. The only sounds are those of the nature around me and the hard breathing of the dogs. I believe there is so much

Cesar’s Advice For Walking A Pack Of Dogs

Dear Cesar, I have four dogs that I’d love to take for dog walks altogether. The problem is that the minute the dogs see the dog leashes they get so over-excited, they run around and bark. It takes me forever to catch the dogs to get the dog leashes on. My lab weighs 100 pounds or 45 kilos and once I am able to catch him he pulls me and steps on my other two dogs, a JRT’s and a rat terrier-Chihuahua mix. Please help me walk my pack of four dogs. Theresa Vinciguerra Vinopal Cesar’s Advice on How to